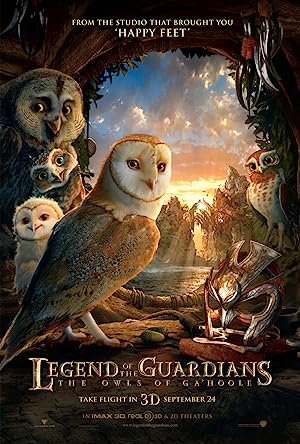 Legend of the Guardians: The Owls of Ga’Hoole is a 2010 3D computer-animated fantasy adventure film directed by Zack Snyder. Based on the Guardians of Ga’Hoole book series by Kathryn Lasky, the film was written by John Orloff and Emil Stern and features the voices of Helen Mirren, Geoffrey Rush, Jim Sturgess, Hugo Weaving, Emily Barclay, Abbie Cornish, Ryan Kwanten, Anthony LaPaglia, Miriam Margolyes, Sam Neill, Richard Roxburgh, and David Wenham. An international co-production between the United States and Australia, the film was produced by Village Roadshow Pictures and Animal Logic, following their success with the 2006 film Happy Feet. In Legend of the Guardians, Soren, who loves listening to stories, is kidnapped and brought by the Pure Ones to St. Aegolious Home for Orphaned Owls led by Metal Beak and Nyra where the owlets are brainwashed to becoming soldiers. Soren befriended Gylfie, and later escape the facility to find the Island of Ga’Hoole with new-found friends and together fight against the evil army.

Legend of the Guardians was theatrically released in RealD 3D and IMAX 3D in North America on September 24, 2010, and in Australia on September 30, 2010, by Warner Bros. Pictures; it was accompanied by a new 3D Looney Tunes cartoon entitled Fur of Flying. The film grossed over $140 million worldwide against a budget of $80 million. Critics praised its dark tone, visuals and voice acting, but criticized the screenplay and said it failed to live up to its potential.